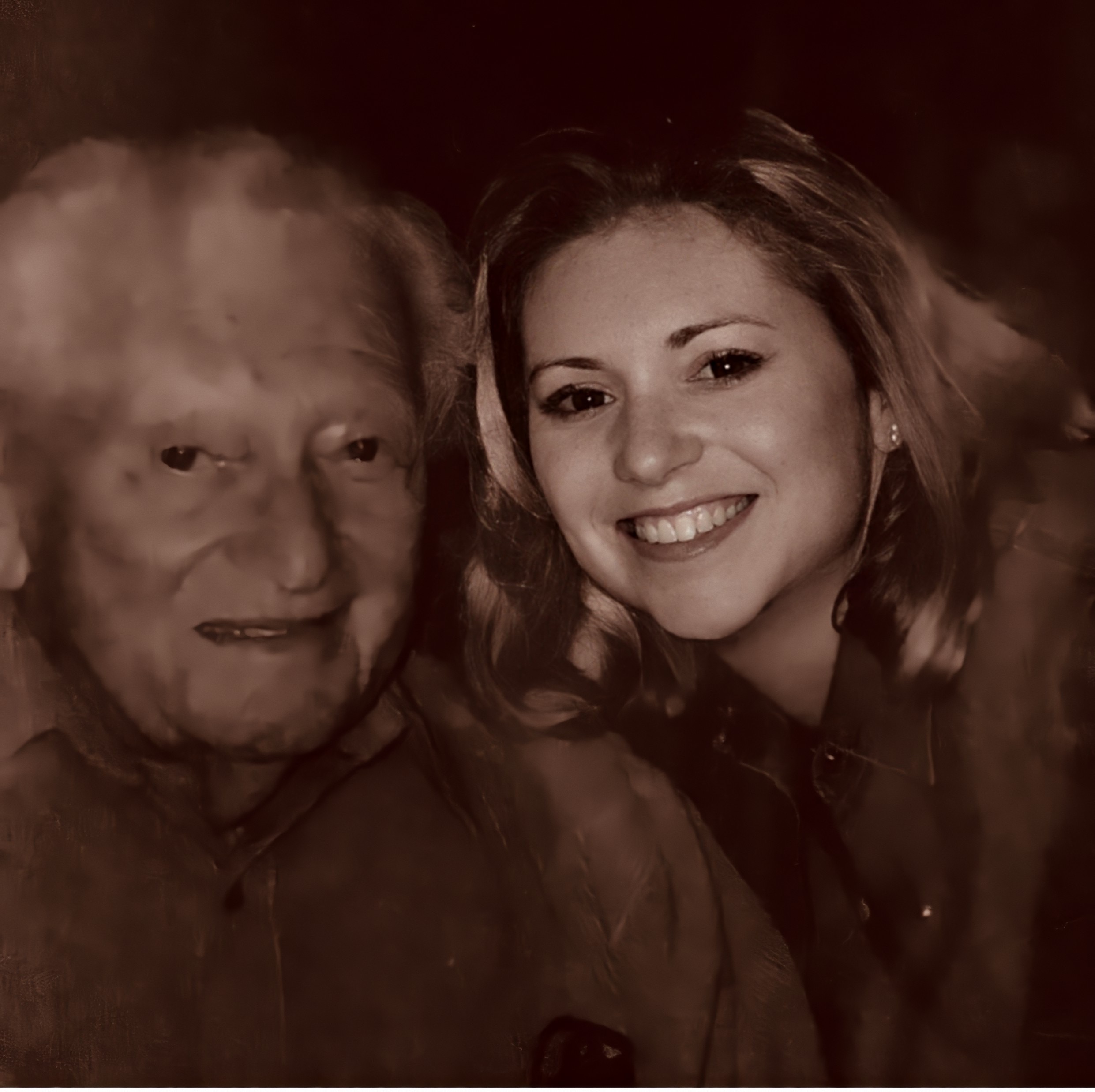 April is a month symbolizing growth and fresh starts, so it’s only right we share this warrior’s story as we enter this new season.  A survivor of intense  “unseen” abuse,  JJ celebrated her 9 year “freedomversary” this month.  Here, she shares her story of reflection, resiliency and lessons in love from her grandfather–all in the hopes of inspiring others to own their truth, for better or for worse.

I’d been anticipating this moment for weeks. Why, I’m not sure. I’ve been doing this for the last eight years. Now it’s nine. I feel it as if it were only 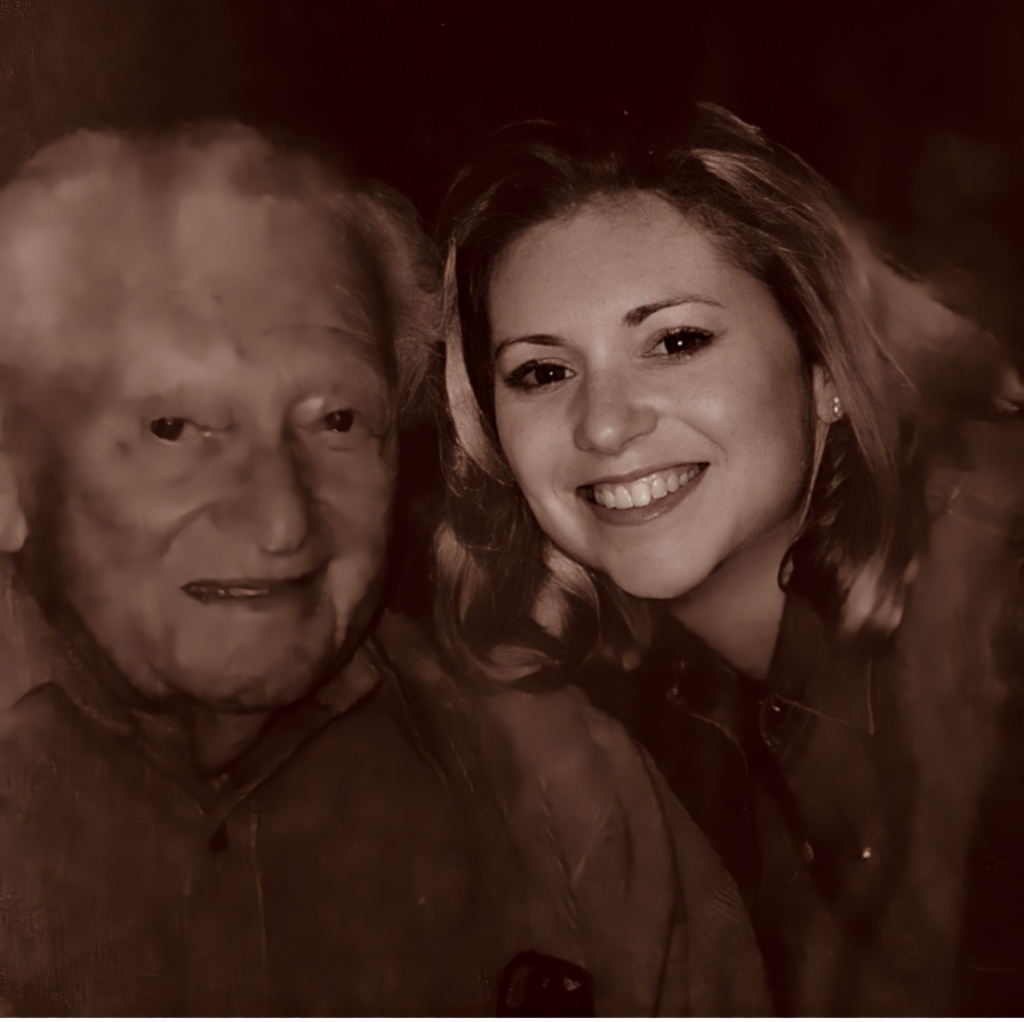 I strike the match and begin to recite the Mourner’s Kaddish, the Jewish prayer for the dead. It’s the ninth anniversary of the death of my grandfather. We were all there. He was the last of my four grandparents, to whom I was very close. The memories of the days before his death flood my brain as I begin to pray. Love. Family. Legacy.

My hand shakes as I light the yartzheit candle; the candle we light to honor those who have passed. The tears roll down my cheeks.

The memories come flooding back, and I’m suddenly so angry. He was so selfish that he couldn’t even support me when he was dying and finally passed; when all seven grandchildren, including one cousin who was six months pregnant, carried his coffin from the hearse to the burial spot. Decades ago, my grandfather had a corner of the non-Jewish cemetery in town consecrated for all of us, so we could always be together. I was handed the American flag from the coffin. My legs felt as if they would give way and my heart broke into a million pieces. But he couldn’t be there for me because the death of my grandfather reminded him of the loss of his own grandfather. But I was his wife. He should have been there so I could talk about it, and mourn.

Our lives were devastated because of him. I felt like I was less because of him. My mind was twisted into a trillion little knots over the course of those 20+ years, many of which still need to be unraveled. Everything he did was in my name. He brainwashed me and made me believe that it would be ok. He was my husband; I wanted to believe him. I was supposed to believe him, to believe in him. Something in the back of my mind told me otherwise, but it was easier to ignore it rather than tangle with him. Toward the end of our marriage, he’d begun to admit he is a narcissist. He could never be wrong. He needed to feel like he was the best, the smartest, the flashiest. All he was, was a common thief and a liar. He decimated the lives of our daughter and me for a long, long time.

From the time I was 16 until I was almost 40, he slowly and insidiously turned my brain into that of a robot. I did what I had to do to get through every day without an argument. I left an amazing job and career (because I was forced to, so he could totally control me and my income), and stayed home. No toys were to be on the floor by 4:00, because that was around the time he’d get home. I didn’t want to hear it. No dishes in the sink. Dishes done. Money transferred as he directed. He said it was fine. I believed him.

I texted my husband of nearly five incredible years and asked him to come downstairs. I couldn’t speak. I was sobbing as the pain from it all washed over me like a tidal wave. My stomach wracked; my body crumbled as I watched the flame flicker to life. I never had a chance to mourn my grandfather; it was the loss of all four of them twisted together. It’s not fucking fair. Everything came crashing down less than a month later, on April 1, 2011. I didn’t get to go into my grandparents’ house with my parents, aunts, uncles, and cousins to clean out everything, to remember, to have closure. My life, by that point, had shattered and I was physically and emotionally immobile.

My grandfather’s death marked the beginning of the worst time of my life with my ex. My abuser. The person who should have protected me and our daughter. Who should have been there, but only thought of himself. Even when he gave so generously, it was because he wanted recognition. He wanted to be in the limelight. He wanted us to kiss his feet in some way. It was all blood money. And it was all in my name. Why? He convinced me it was fine. That his boss knew. That the white collar crime he was committing without my knowledge was really and truly above board. I asked once, and it was the wrong thing to ask. But he never hit me. All he said was that his hands were “getting hot.” That was enough to shut me up.  I didn’t want to risk that, ever. The wild look in his eyes was enough to scare me into submission. Every once in a while, if I overstepped my boundaries, something would whizz past my head. Or in a rage, he’d sweep the unsorted mail from the table onto the floor. All in front of his own child. I made him apologize to her. “How would you feel if someone spoke to her that way?” I’d ask. But it didn’t matter; it cycled from apologies and sweet nothings (and it certainly meant nothing in the end), to it happening all over again.

As I cry for the loss of my grandfather, the memories of all four of my grandparents crashes together in my mind and I wonder what they would have thought about this. If they would have been mad at me, or asked me why I didn’t say something before it got so bad. They would have told me I could have come to them, as so many family members have told me over the years since it all happened. I’m still ashamed and I still blame myself. I should have known better. But I thought I could take care of it. I didn’t want to know what was really happening, because in reality, our lives were like a train going off the tracks into a bottomless chasm of disaster.

When you’re not hit, and you hear stories of abuse, of how women you come to know and love as your sisters; are thrown into walls, lose teeth, are forced to do drugs, are shot, or worse…you feel like maybe it wasn’t so bad. Maybe your abuse is “less than.” But the effects last for years. Your abuse, MY abuse, was psychological, financial, and emotional. I was raped on several occasions when he was high on prescription drugs and he never remembered. But he never hit me. The scars aren’t visible but they sure as hell are there. Sometimes because you’re not hit, you wonder if you’re the crazy one and maybe the abuse wasn’t really abuse. You question your own sanity. Did it really happen the way I remember it?

WomensHealth.gov, the federal website dedicated to the lives of women, has a section on “Relationships and Safety.” It has sections on intimate partner violence and rape. The “other” types of abuse are emotional, financial, elder abuse, stalking. Am I an “other,” because I was never hit? Because my scars don’t show? Because it’s not sexy enough to be headlined on TV or in the movies? The answer is a definitive NO.

The NNEDV, the National Network to End Domestic Violence, cites financial abuse as occurring in 99% (let’s assume ALL) cases of domestic violence. EVERY SINGLE ONE OF YOU READING THIS, and every man or woman you know who is a survivor or who is in an abusive relationship, has been victimized financially.

These include controlling how money is spent; forcing the partner to stop working or sabotaging his/her current employment (check); running up debt (check); giving the partner an “allowance” or refusing to give him/her money at all (check); or on the flip side, refusing to work; stealing income or government benefits such as food stamps; or refusing to otherwise contribute to the household. Sometimes, as in my case, they manipulate or force the abused partner into writing bad checks; hide assets; forge legal documents; or commit financial crimes in the name of the victim (Source: https://nnedv.org/content/about-financial-abuse/).

Over a period of several months, in the early days of our marriage, he stole $30,000 I’d saved for a house. He used it for drugs such as Ambien and Stadol. When that ran out, he told my mother, who was a nursery school teacher, that we weren’t making ends meet (which was a lie; I was making over $100,000 at that time). She cashed all of her paychecks and gave them to him so he could snort or swallow something to make him high as a kite. I didn’t find all of this out until afterward. In fact, I found out a lot afterward that, if I’d known, only MIGHT have gotten me to tell someone what was going on. But would I have really done so? Would I have tried to fix him again, or would I have been too embarrassed? I’m second-guessing myself to this day.

In one study of women in the Philippines on the effects of economic, physical and/or emotional abuse (https://www.ncbi.nlm.nih.gov/pmc/articles/PMC4265545/), emotional and financial abuse were clearly related to higher suicide attempts, anxiety, depression, infertility, and PTSD. The authors state the following: “The strongest…association was between the economic abuse measure ‘spouse controlled money or forced her to work’ and suicide attempts…and psychological distress…compared to those not exposed to this form of abuse, respectively.”

Finally, last but certainly not least, is the very validating book, Does Stress Damage the Brain?, by J. Douglas Bremner. In it, he cites several studies that have compared the brains of abused women to those of combat veterans. The reactions to stress in both groups are the same. We are also veterans of combat; of wars in our own homes where we should be safe.

We are not “less than,” regardless of how un-sexy the media may think our abuse might be. We are part of this unintentional club of survivors. My abuse may not have been physical, but I sure as hell have PTSD, depression, and anxiety. Who knows if it will ever go away? If I will ever really heal?

It’s taken nine years so far, and I’ve just cleared up my back taxes. Only now have I been able to get a credit card. I have to pay restitution forever. But, I’m finally free. It took him getting arrested and going to jail for over six years, for me to see what had happened to our lives, and to get out of an abusive relationship. If you’re there, and you’re reading this, I beg you to please tell someone. Don’t let yourself fall as far as I did.

I sob as I start to recite the prayer again. This time I’m using a recording from YouTube, as I can barely speak. Not because it’s prescribed, but because I need it. I never got that chance to absorb the loss; to really feel it. I chant in time with the rabbi.

My husband comes, and I finish the prayer. Amen.

I fall into his arms. I may not ever be healed, but I know I’m safe.