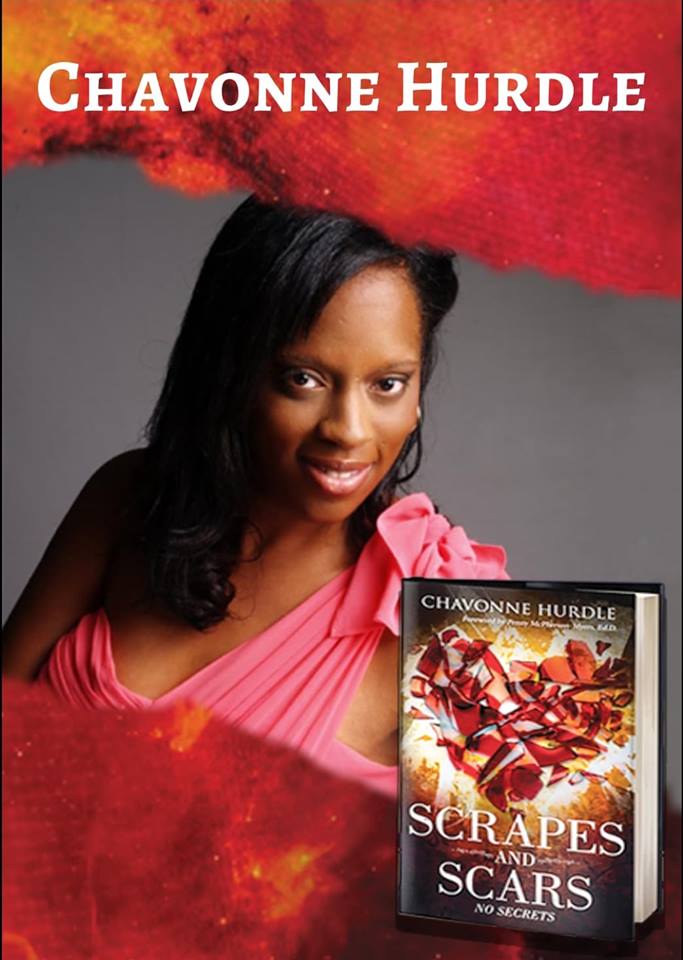 In the wake of the growing #MeToo movement and the courageous survivors who stand behind it, #SurvivorSunday feature, Author Chavonne Boyd-Hurdle, shares her own brave story of survival in her powerful memoir, ‘Scrapes and Scars: No Secrets’.  A survivor of child sexual abuse and intimate partner violence, Chavonne uses her platform to raise awareness for both causes and show others just how bright the light is at the end of the tunnel.

I was sexually abused by my uncle for 3 years. Then, I was physically, emotionally and mentally abused by my ex-husband. This  is my story of survival, of bearing my wounds and learning to speak my truth.

The first time it happened I was 12 years old. My uncle held me down and forced himself on me. Months later he forced himself in my mouth. Years later, my ex-husband did the same thing. For years I believed that this was the kind of treatment I deserved—why else would these men who supposedly loved me do this to me?

When I was a high school freshman, my uncle confessed to a counselor that he had sexually abused his niece. There was an investigation, but I lied to the social worker because I was afraid of the threats my uncle had always told me. “If you tell anyone, you’ll be responsible for breaking the family apart. Your parents will lose everything. Your siblings will go into foster care.” After the investigation my mother tried to cover up her brother’s actions, never telling my dad. She acted like the sexual abuse was a one-time thing, as if it hadn’t happened again. I left home because I felt like my parents were against me.

When I moved in with my ex-husband, I didn’t know that I was escaping one abusive home for another. He controlled our money, how I dressed and who I spent time with. He isolated me from my friends. If I went against his plans, like saying I wanted to go to college, he would fly off the handle and we would end up fighting. I defended myself until I couldn’t anymore.

Like many victims in these kinds of situations, I had a gut feeling that what he was doing was wrong, but I never used the word “abuse.” In my mind he was still my hero, the one who helped me escape my family. He loved me and promised that he would give me the world. Even though I was depressed, my energy and spirit broken, reliant on drugs and alcohol, I wore a mask of happiness to the world for years. It wasn’t until I became a mother that I started to feel a reason to live again. Once my daughter was born, I decided to take control of my life. At that moment in my life, I began to crawl, stumble and walk along the  road to recovery. Years later, I was finally able to separate from my ex-husband. He later filed for divorce using it to control me. He wouldn’t let me go without putting me through hell first. He took me to court to try to prove that I was an unfit mother with no job and unable to financially support our
children. He even decided not to honor our separation agreement.

I fought him in court for 2 years. Without his support until the courts decided,  I had three children and no place to live. With my back against the wall, I moved back in with my parents and after my daughter’s belongings was stolen I was homeless again. My car broke down when I did find a job but had to quit. Eventually, I desperately reached out to a friend and she let me live with her until I found a place of my own.

It’s been a long and difficult road back from hell. Thanks to faith in God, and help from a therapist, I am living my best life after surviving childhood sexual assault and domestic abuse. Though the pain never completely goes away, the smile I wear today is genuine and my spirit is filled with hope, love and life. I can finally see how beautiful, smart and strong I am.

My new goal in life is helping other girls and women like me who are afraid to tell their secret. It’s often hard to tell when someone is suffering on the inside. For 23 years I wore my mask very well, hiding my abuse from many people who, now that my book is out, cannot believe what they are
reading. I also want to help parents to make them aware of the signs to look for in their children.

My advice to my children and other women would be to never be afraid to ask for help. There is someone out there to help you. You are not alone even if it feels like you are. Even though it’s hard, please trust someone. I would also offer this advice: never give up. Find something to hold on to. No matter what it is, you find it and you hold on to it! That thing will give you hope. Life gives you ups and downs. We just have to find ways to hold on to the highs when our side of the scale is down. There is life at the end of the struggle and it may not be easy, but it is all worth it.

AUTHOR’S BIO:
Chavonne Hurdle is a child advocate, author,  mentor and coach. Her newly released book, ‘Scrapes and Scars: No Secrets’, is a short memoir about her tragic experience of child abuse and her journey towards truth and healing. It’s a raw, powerful story about overcoming the odds when you were set up to fail and discovering the beauty we all carry beneath our scars.  You can purchase your copy at Amazon and Barnes -n- Noble stores.