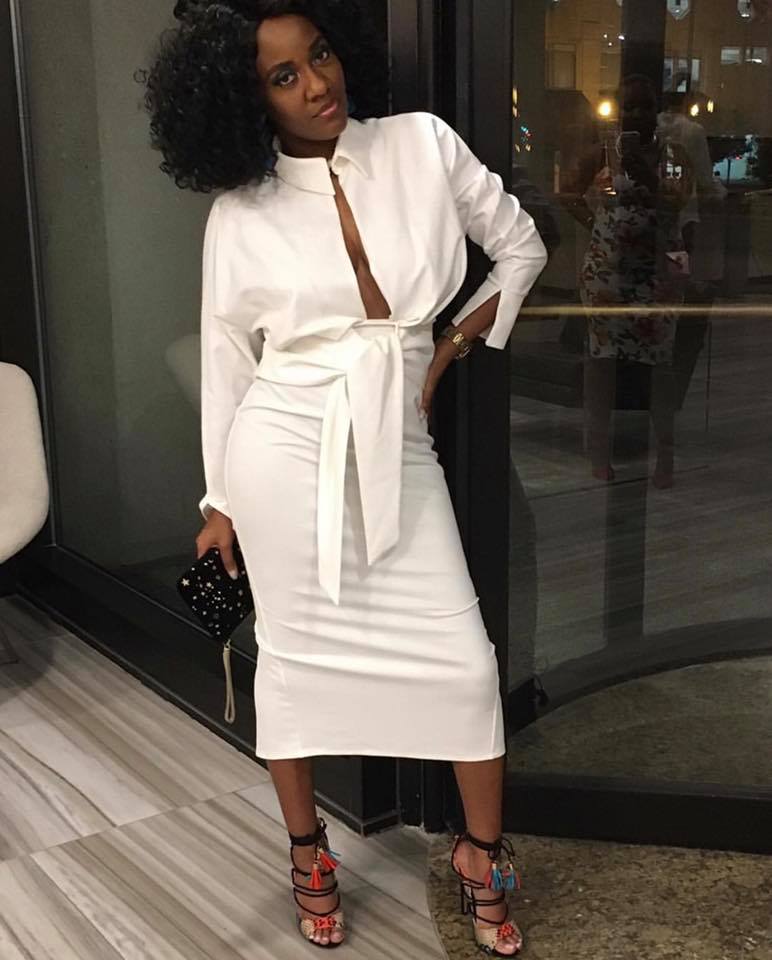 July’s #SurvivorSunday feature is the beautiful and resilient, ChNika Clark. A survivor of what many believed to be the impossible, ChNika vowed to turn tragedy into triumph and show the world just what it means to be unstoppable.

In 2014, I went through my first domestic violence experience — with a man I was with for 8 years. We had built a life together. We had one child together who is now ten, and he had two children from a previous marriage that also lived with us full time. We were a family. But unfortunately, our relationship and our family suffered because of his constant infidelity.

After going through so much in the relationship with his cheating, the love and respect I once had for him was fading. I tried to leave him almost every year that we were together, but he would always convince me we could work things out. We tried relationship counseling and joined a church together.

I loved him, and I really wanted it to work, but in 2014 I had finally had enough. The tension in the house was thick. For about 3 months, we had been walking past each other without speaking. I had been sleeping on the couch for 6 months. I knew he was being unfaithful, but I didn’t even care because I knew that I was leaving soon. The stress of the relationship was making me physically ill– so ill my doctors originally thought I had lupus. When I found out my symptoms were caused by chronic stress and anxiety, I had an awaking. It was time to leave. One day he went to work, and when he returned, I was gone.

Once I left the home, it didn’t take me long to find a job, move into my own place, and get a new car. At first, we decided to continue our relationship from separate homes, but as the months went by, I wanted out of the relationship for good. Finally, I broke up with him.

Around 11 p.m. on November 18, 2014, he woke me up with a gun in my face while trying to get my son out of the bed. When I realized what was happening, I started screaming; he then let my son go and choked me, pushing me from the bed to the floor. He told my son to get out and close the door; he did.

From 11 p.m. until 5 a.m., a lot happened behind those closed doors. Originally, he said he wanted to kill himself, and I was trying to talk him out of it. That changed quickly. He became a man I’d never seen before. I didn’t know him. He was a stranger. He became enraged at times. He felt the breakup was because of another man, and wanted to know who this man was. Every time I would deny it, he would smack me. This was the first time I had ever been hit by a man. I was shocked and afraid. After hitting me, he raped me numerous times and said he would do everything that he always wanted to do that I wouldn’t consent to. It felt never-ending.

At one point, I tried to fight back and take the gun away from him, but he overpowered me and tied me up. He told me to stop fighting or he’d kill everyone in the house. Our kids and dog were in the next room. I told him I would take it.

In the early hours of the morning, I asked to use the restroom, and he let me. While I was sitting on the toilet, I heard a noise. When I looked up, I saw him in the opening of the doorway, shooting at me. When I realized what was happening, I jumped in the bathtub, but he quickly pulled me out. While we were standing face-to-face, he shot me in the leg, breaking my femur bone. I dropped from standing to sitting. He stood over me. I screamed, pleading with him, waving my hands around, trying to push the gun away. He grabbed my hands, put the gun to my head, and pulled the trigger, but it didn’t go off. Then, he put the gun to my chest, and he shot me. The blood poured out of my chest like a waterfall. I thought my life was over. Thinking it was the end, I laid down with my face to the floor. He sat down beside me and then shot himself. His hand rattled as the gun hit the floor. Once it was calm and quiet, I got back up, and I crawled over him, never looking at him, never seeing any blood. I found my phone to call for help. While I was waiting for help to come, I prayed for him. I prayed for the Lord to forgive him because he was not himself.

Not long after, two police officers arrived and tied a tourniquet around my leg to stop the bleeding. I was transported to the hospital. I was never really in pain; my body was in shock. I don’t remember anything about my ambulance ride to Norfolk General Hospital; I only remember arriving in the emergency room and seeing bright lights. There were lots of people standing around me, discussing the next moves. I was reaching out for anyone’s touch — just wanting someone to hold me, say something to me, show me some love. Finally, a lady — maybe a nurse — held my hand, and I squeezed it with relief.

The next thing I remember, I was waking up to a room full of people. My friends from school, my cousins, sister, best friend, aunts, mother, and even some of my ex’s family were surrounding my bed. The police had told both families that we were shot, but they found out at the hospital that he was the shooter and that he had died. I later found out the doctor told my family I wasn’t going to make it, and all my loved ones rushed to the hospital to see me one last time.

Miraculously, I survived. The Lord saved me. I completed physical therapy for my leg, and I now have a rod where my femur was broken. I returned to work a few months later. I realized life goes on. I had to continue. The bills never stopped, and my son needed me most. I had no choice but to get up and push on.

It’s been almost five years since that horrible night, and overall, I’m okay. When people see me, they would never know that any of this ever happened. I currently work for a mortgage company, and my son is doing well in school. His sister and brother reside with their grandmother — my ex’s mother. Our families were divided by this tragedy; that’s what’s most hurtful for me. But when I start to feel down or stressed, I always remember how blessed I am and that the Lord kept me here for a reason. Any way I can help other survivors of domestic violence, I will — and that includes sharing my own story of healing. I have been through a lot, but my struggles don’t define me. I’m more than a victim; I’m a survivor.